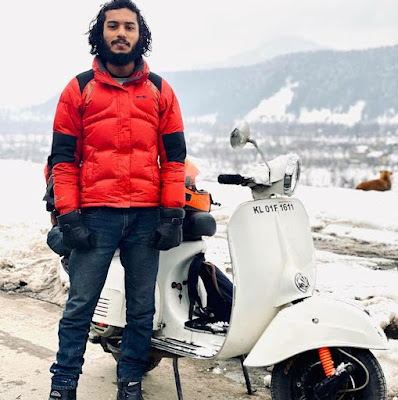 Vellak Komban is the name of a channel owned and operated by Misab. Misab aka Vellak Komban was an 18 years old boy from god’s own country Kerala. He travels from Kerala to Kashmir with his Bajaj Chetak 1994 model. Let’s know more about him…

Misab aka Vellak Komban was born on the 3rd of June in the year 2003 in Kerala. He completed his schooling at a government school in Kerala and after completing his schooling, he moved to Cochin for his 12th studies. Vellak Komban’s father was a teacher in a government school and his mother was a housewife. He has one older brother and one younger sister in his family. Let’s read Reymen Wiki.

Vellak Komban started his career as a YouTuber in the year 2021. When he was in his 12th studies, he was very much inspired by the American YouTuber Alex Chacon. So he made up his mind to be a YouTuber. At first, he does many trips on a bicycle which is around 100 – 250 kilometers on cycle.

Finally, in February of the year 2021, he created his YouTube channel and started posting videos. He saved some money and started his journey from Kerala to Kashmir. He uploads just 30 videos on his channel and he will be able to make 30k+ subscribers on his YouTube channel. He also makes videos for Instagram where he has more than 20k+ followers.

Vellak Komban was not leaving his studies. He said that he will continue his studies when he comes back to Kerala from the Kashmir trip. He was now in his +3 first year. He studies commerce now. For now, he has not decided what he wants to do in his life. Let’s see what Vellak Komban does with his life. We will update here very soon.